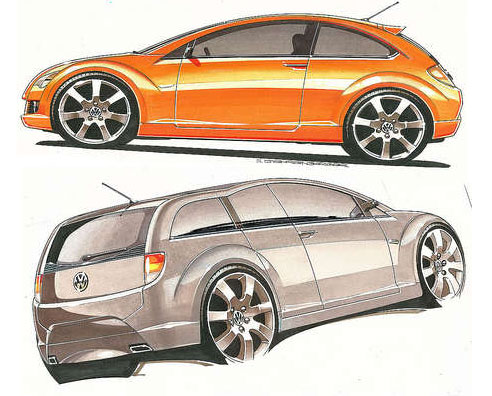 Looks like Volkswagen is ready to take the Beetle in a whole new direction, because a few new illustrations of the revamped VW Beetle have surfaced and they are decidedly less retro-themed than the current “New Beetle.” Instead, these images — found in German magazine Auto Motor und Sport — depict a fairly modern looking vehicle, set to arrive in stores as a 2010 model. Instead of a big bulbous roofline and bubbly features throughout, the next-gen Beetle “will also become sportier, with the aim of competing more directly with BMW’s MINI.”

Like the current New Beetle, we also fully expect this next offering to come in both a standard coupe and droptop cabriolet. My personal impression is that this new car has certain elements that make me think of Peugeot and Citroen. Is it just me?