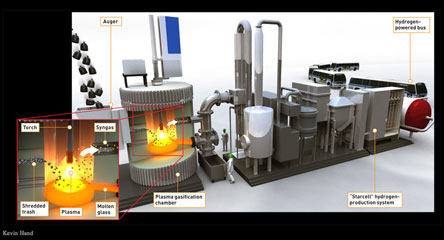 This huge space age-looking contraption is a trash converter, which does a sort of reverse evolution number on your trash, zapping it back down the food chain to the molecular level with a combination of ingenuity and superheated plasma 30,000˚F (three times the temperature of the Sun). The machine takes electrons from the air and turns them into plasma, which is set on fire so hot that it literally breaks down anything in its vicinity into its building-block molecules. By-products of this incredibly molten process include a synthesis gas and a leftover glass type material.

The Plasma Converter is the creation of Joseph Longo and Startech, a company in Bristol, Conn. The machine takes any form of mass and energy, most notably trash that is serving no other purpose and costing taxpayers millions each year, Longo even tested it with shotgun shells, bricks and just about anything under the sun. But certainly never nuclear waste. The machine turns all those into electricity. The company plans to sell machines to cities and towns whose people would like to avoid such things as landfills. And for those who can’t avoid them, since they are in their backyards.