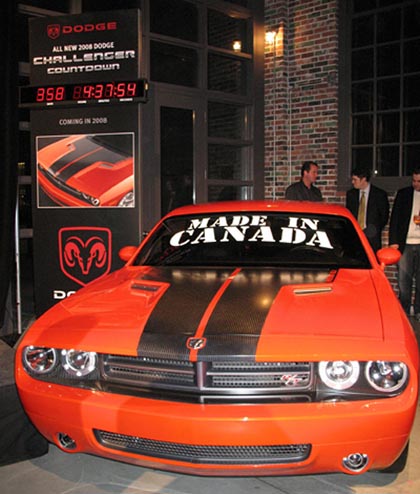 Let the countdown begin… quite literally, in fact, as Dodge just unveiled a clock that is counting down to when they’ll finally take the cover off of the 2008 Dodge Challenger. We saw the concept vehicle in Detroit last year, but as I’m sure you’ve experienced by now, concept vehicles and the their production counterparts usually aren’t the same kind of beast. According to the clock, we’re about one year away from the official unveiling, which is scheduled for the 2008 Chicago Auto Show.

In addition to announcing when they’ll be announcing their new car (meta-announcement?), Dodge also mentioned that the new Challenger will be built in Canada, as you can plainly see by the letter emblazoned on the windshield. The Challenger will be assembled in the same Brampton, Ontario plant as the Chrysler 300, Dodge Charger and Dodge Magnum. I guess that makes sense since they share the same underpinnings.