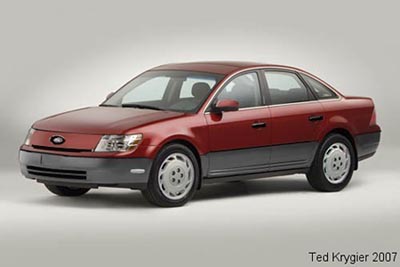 Yes, you read that headline correctly. GM (via their fanboys) issued a press release unveiling the 2008 Ford Taurus Heritage Edition. What they didn’t note was they were just poking fun at the blue oval for resurrecting the old sedan’s namesake after the Five Hundred flopped in the marketplace.

I know, Ford hasn’t being doing all too well this past little while, with the only exception being the continuing success of Ford F-Series pickup trucks. But this is hitting a little below the belt, isn’t it? Well, all you Mustang and Focus owners in the audience shouldn’t exactly rush to the post office to send off that hate mail to GM, because it wasn’t the automaking conglomerate that drafted up this bogus press release. It was “the GM fanboy community over at Cheers and Gears.”

Here it is in its entirety, if you want a good chuckle.

CHICAGO, Feb. 7, 2007 – Ford Motor Company today announced it is bringing back the well-known Ford Taurus name, introducing a new special version – Heritage Edition – for its aging hipsters to go on sale this fall.

“Taurus has been an icon for rental sedans for more than two decades, and it’s time to return this powerful name to where it belongs,” said Mark Fields, Ford’s President of The Americas, at the Chicago Auto Show. “Consumer awareness of the Taurus name is double the Five Hundred that it’s replacing, and thats damn good enough for us to forget the latter altogether!.

“By giving these vehicles the bland looks of the 80’s that consumers recognize at the same time we’re making significant upgrades, we’re confident that even more rental companies are going to be attracted to these great products in the future,” Fields added.

The 2008-model Taurus Heritage Edition sedan will go on sale this fall, as an upgrade to the earth shattering ALL NEW Ford Taurus. The new Heritage Edition features a fully flush grille guard with peek-a-boo Ford emblem, a new dual color scheme, a new cornering light, more standard safety features – including dual airbags tuned to explode with that classic pop that made people file lawsuits in the early nineties– and other refinements to make it more retro, cheezier, mellower and homlier.