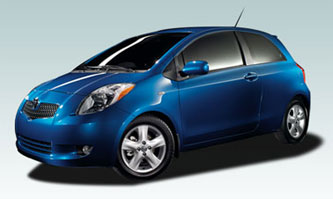 The subcompact hatchback segment is getting a little crowded these days, as everyone tries to avoid the rising prices at the pumps while maintaining enough cargo space and utility to actually have a useful car. The Toyota Yaris fits right into this description, offering class-leading fuel economy, oodles of interior room, and enough features that would make its bigger Corolla cousin blush.

As some of you may know, the Toyota Yaris replaces the Echo hatchback, which in term replaced the Toyota Tercel. It is thoroughly marketed as a cheap city car that will get around town on a budget. With this in mind, the initial impression is that Toyota has hopped up the goodies found within with much more than what you normally find in an econobox. For example, if you opt for the highest end model, you’ll get an in-dash 6-disc MP3 CD player. My parents’ Corolla, which is supposed to be placed higher on the spectrum than the Yaris, does not have this feature. In fact, the Corolla LE does not even have a car deck that will take MP3 discs. The Yaris can and does.

Toyota is aiming to consolidate its international vehicles so that there is little confusion when you are talking about any of their cars. The Echo hatchback, for example, was known as the Vitz in Japan and the Yaris in Europe. The current incarnation is still known as the Vitz in the land of the rising sun, but I foresee them changing this very soon so that the Yaris will be the Yaris everywhere you go. Makes things easier, don’t you know?

In any case, the newly designed Toyota Yaris (which received a rather radical do-over for the 2006 model year) sports a lot more aggressive styling than the “toy car appearance” of the 2005 Echo hatchback. The rear windshield is more sloped, the lines are much rounder, and the hood and nose feature much more prominently. The Toyota emblem on the front has been enlarged, and overall, the car is bigger than its predecessor in just about every way. It’s taller, wider, and longer. It’s because of this increased size that you get more cargo room. It’s also because of the extra girth that the 14-inch wheels look so tiny.

Personally, I like the new look much more than the old one. It’s much more distinct and decidedly more aggressively, despite its somewhat “bubbly” look which may not go over so well with certain consumers. Comparing it to the 2007 Honda Fit, the Yaris is more car-like in appearance, whereas the Fit — in profile, at least — resembles a shrunken-down minivan. I like the Yaris from the outside, but what about inside?

Man, this is cheap. Everything about the interior of this vehicle, whether you are looking at the bottom-end base model or the top-end RS, looks and feels cheap. The materials chosen for the Yaris are a far cry from what you’d find in a Lexus, to be sure, but considering that an equivalently equipped Honda Fit is priced about the same, the Yaris could have done better. I was thoroughly impressed with the choice of high-quality plastics in the Fit. This is not the case with the Yaris.

It really does feel like the Echo and/or Tercel all over again. The seats are fine, but nothing special. The dash looks like it was pulled from the last-generation Echo. Even the shift knob looks like it could have been found in the bargain bin at your local thrift store.

As far as ergonomics, Toyota is telling us that a center mounted console makes for fewer accidents because the driver can more easily glance at the speedometer if they just have to shift their eyes to the right, rather than having to glance down to where the gauges would normally be placed. If this is your first time in a car with this kind of orientation, however, you’ll find yourself thrown a little aback. Where the gauge “hump” would normally be, you find a lift-up compartment. The dials for heating and air conditioning are also mounted in a straight vertical line, descending down from the gauge cluster. This makes the driver and passenger sides of the dash feel kind of empty.

One thing that Toyota really has going for them, in terms of the Yaris anyways, is that it comes loaded with compartments just about everywhere you could possibly imagine. There are slots, spaces, boxes and all sorts of places for you to stash your things, whether you need a spot for parking change, your sunglasses, or the latest Stephen King thriller. In the doors, for example, you can find the usual slot, but one section protrudes somewhat, offering you an additional cup and/or bottle holder. Those are everywhere too, so you don’t have to worry about running out of space.

In the commercials that Toyota has for the Yaris, they have it zipping around town in a very speedy kind of way. It won’t win any drag races, but the Yaris was surprisingly peppy, considering that its 1.5L four-banging engine only develops 106 horsepower and 103 lbs-ft of torque. That’s not very much power, but the car is also very light (they kept the curb weight between 1043 and 1082 kilograms, or about 2300 and 2385 pounds) and the engine comes with VVT-i, or intelligent variable valve timing. This technology was originally only found on “sportier” cars, but is now found standard on even Toyota’s cheapest car. With variable valve timing, it can help you get enough torque down low while also providing enough horsepower at higher RPMs to really get you going. It’s not exactly fast, but it’s faster than I thought and surprisingly nimble around the corners (considering the vehicle’s height).

Easily the biggest selling factor for the Toyota Yaris, though, is that it boasts class-leading fuel economy figures. It’s ridiculously cheap to run. In fact, there is nearly no difference between the Yaris with the standard transmission and the one with an automatic (this is usually at least a few MPG). Based on the Toyota Canada website, you’ll get about 40mpg in the city and 50mpg on the highway, or about 7.0L/100km and 5.6L/100km for city and highway driving, respectively. Based on the 40 liter gas tank found within, that works out to about 600 kilometers (380 miles) between fills, assuming a blend of highway and city driving.

In Canada, the Toyota Yaris is available both as a hatchback (three-door or five-door) and, more recently, as a four-door sedan. The pricing between the two versions is comparable, as are the features. Pricing in Canada for the Toyota Yaris hatchback ranges from $13,800 and $18,770, before taxes and so on. The sedan costs between $14,605 and $15,605.

In the end, I’d say that the pros for the Toyota Yaris are that its exterior design is vastly improved over the previous generation, it has incredible fuel economy, and there are compartments (and cargo space) just about everywhere you can imagine. It’s the ultimate utility vehicle in the tiniest of packages. On the downside, when you start tacking on some of the niftier features, it can get pretty pricey, easily bordering on how much a Corolla, Civic, or Sentra would cost you. The interior plastic is also very cheap feeling, and the gauge design may take some getting used to. On the safety front, it would have also been nice to find some side curtain airbags.