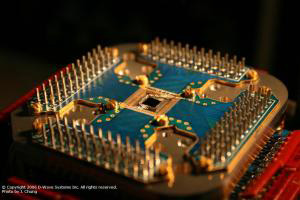 We’ve heard a lot about quantum computing lately, but a Canadian company says it got to the “commercially viable” table first. That company would be D-Wave Systems, and it demonstrated its system on Wednesday at the Computer History Museum in Mountain View, California.

The system is named Orion and is based on a 16-quantum-bit silicon chip that can, astoundingly, retain binary values of both zero and one. The “qubits,” as they’re called, do their best imitations of each other and those actions, taken together, create enough computational power to do certain low-level processes.

Now that 16 is a rather low number. D-Wave is working on a 32-qubit system and aims to have one with 1024 by the end of next year. That should be enough to solve a lot of problems that can’t be solved with present-day computers.

Quantum computers are able to, in a way that today’s computers cannot, solve problems that involve absurdly high volumes of complex data and variables. Once they become less than absurdly expensive to make, they will be a boon to today’s number-crunchers.