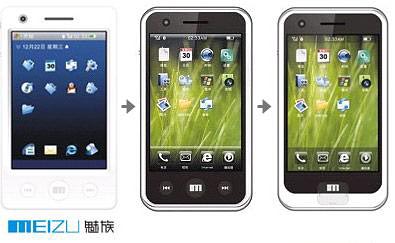 Even though the Apple iPhone hasn’t made it to market yet, we’re already getting bombarded by a deluge of iPhone clones. Meizu has responded to iPhone knock-off accusations, admitting that they made some “minor” changes to the M8 phone design after seeing the unveiling at MacWorld by Steve Jobs.

What you see to the right is the progression of styling for the Meizu M8, going from a look that more closely resembles the Linksys iPhone to the Meizu M8 touchscreen smartphone as we know it today. You’ll notice that the background image and set of icons are also much more Apple-inspired than the first iteration.

Meizu representatives do note, however, that they did debut the original M8 “four days before MacWorld”, but they did “tweak” the design shortly afterwards, “slimming it down, adding some metallics, and some other minor changes.”