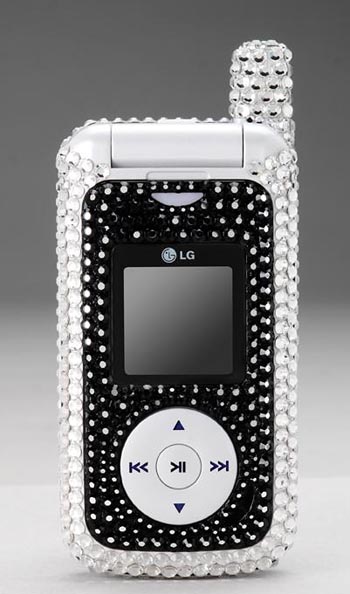 Either every phone maker on the planet has a sudden affinity for shiny things, or Swarovski has started a serious marketing campaign targeted at techies. We’ve just encountered yet another phone encrusted in crystals. The LG FUSIC is already pretty notable for being the cell phone with the built-in FM transmitter, but the bland appearance can be a turn off for some consumers, especially when faced with sexier offerings like the LG Chocolate.

This Special Edition LG FUSIC doesn’t come with any sort of extra feature set or added functionality compared to the original, but it does get all sparkly. I’d imagine it’s a little less comfortable to have in your pocket as well. When you get tired of the eye-twinkler, you can apparently swap out the faceplate for a more conventional one if you don’t want to scare people at work. The rest of the specs — microSD, ringtone composer, integrated camera — are there as well.