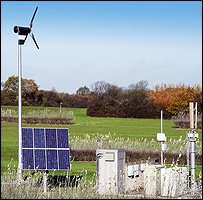 Alternative power has come to the realm of mobile phones, and we’re not talking about vegetable oil-powered chargers. It’s more basic yet expansive than that.

Namibia will soon become the first country in the world to have a mobile phone base station that gets its power from the wind and Sun. It’s the classic work-around solution: If you can’t do something by playing by the rules, change the rules. (Star Trek movie fans will remember this as the Kobayashi Maru.)

The rules say that mobile phone base stations require electricity and that power needs wires to connect the base stations to a grid; without wires, you have no power. But in a rural area, like much of Namibia and indeed other African countries, the cost of installing wires would be prohibitive. No wires, no power.

But Motorola and others refused to play by those rules and changed them, instead, carrying out a test in the U.K. of wind-based and solar rays-based power grids.

The village of Dordabis, about 23 miles east of Windhoek, Namibia’s capital, will be the first to conduct a test drive of this new use for an ancient power source. The base station itself will consume up to 1,500 watts daily, and a six-kilowatt turbine with four solar panels will provide the power needed, they hope. The U.K. test was a rousing success, and organizers expect the Namibia experience to be successful as well.

The network, once it is up and running, will support GSM, GPRS, and even EDGE.