Nokia is keeping itself pretty busy over at 3GSM, unveiling no fewer than three new business-oriented handsets as part of their E-Series: the Treo-like E61i, the fashionably sliding E65, and the flip-open E90 communicator.

First up, the Nokia E61i is a slim smartphone that boasts such goodies as WiFi, S60, quad-band GSM/GPRS/EDGE, and 3G (WCDMA), as well as a full QWERTY keyboard underneath the large 16M color display. The onboard camera is a 2 megapixel unit, with expansion coming by way of microSD. Bluetooth 1.2, USB 2.0, Pop-Port, and Nokia Intellisync Wireless Email round out the features.

The most phone-like handset of the trio is the Nokia E65, a stylish slider that also has 3G and WiFi. No QWERTY keyboard here, fortunately or unfortunately, but it does have quad-band GSM/GPRS/EDGE, a 2 megapixel camera, 50MB internal memroy, microSD expansion, Bluetooth 1.2, and your choice of mocha or red paintjobs.

Last but certainly not least is the Nokia E90 communicator. Many people have been anxiously awaiting this dual personality-rocking wonder for some time. In some ways, it is similar to the LG enV in that it can be used as a candybar for voice calls, opening up to reveal a wide 4-inch display and QWERTY keyboard for other applications like email and web browsing. Easily the most powerful of the bunch, the E90 has integrated GPS, video conferencing, HSDPA, WiFi, 3.2 megapixel camera, Bluetooth 2.0, and a full 14 days of standby battery life. 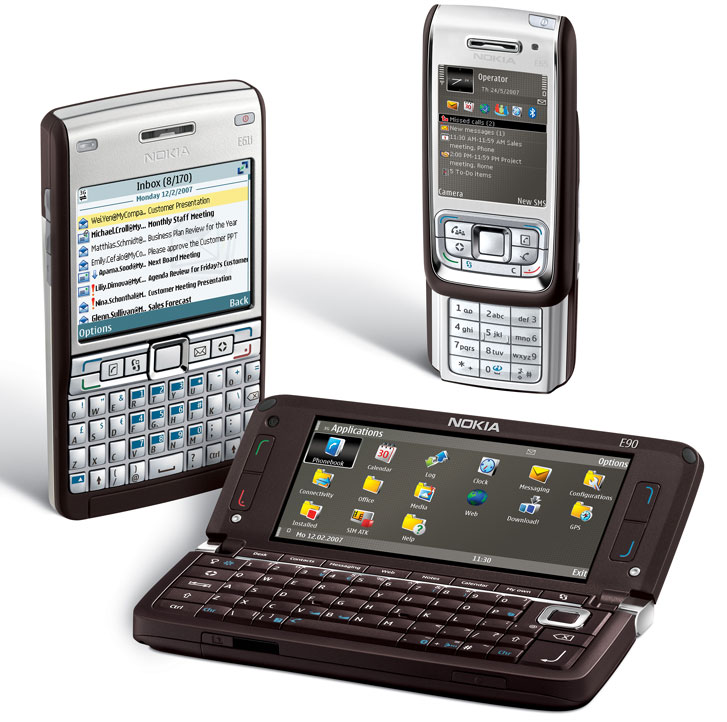