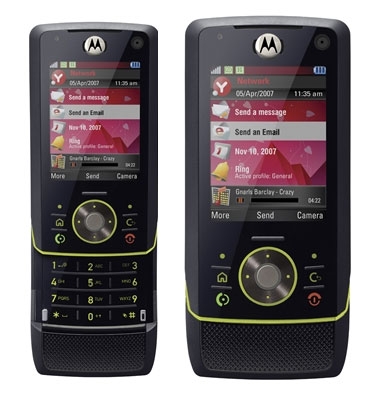 Staying true to their mantra of keeping phones as skinny as fashionably possible, Motorola today added the MOTORIZR Z8 to their lineup. This “entertainment-optimised and ergonomically designed ‘fit-to-face’ slider” was spotted last month, but it’s nice to get the official treatment sometimes.

Unlike other slider phones which are fairly linear in nature, the RIZR Z8 has a “kick slider” which glides the phone open in more of a curve so that it better fits the contour of your face. You’ll also appreciate the high-speed HSDPA connectivity found on-board, giving you access to all sorts of multimedia goodies on the go. Other features include a 16 million color QVGA display, video playback of up to 30fps, 90MB internal memory, microSD expansion up to 4GB, stereo Bluetooth, and a 2MP digital camera.

Motorola plans on sending out the MOTORIZR Z8 starting in June. Pricing is still up in the air.