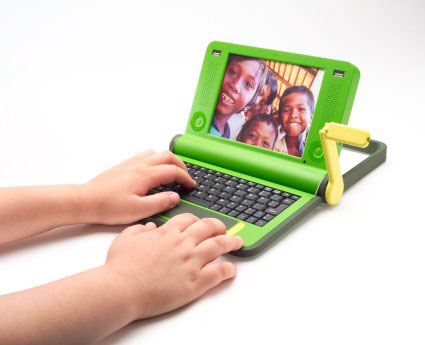 Well, we’re nearly halfway through February, and that means we’re coming up on the time when those ballyhooed One Laptop per Child laptops get delivered to far-flung places.

The project, which has set a price of just US$150 for each laptop, will deliver almost 2,500 of the machines as test drives to state educators in Brazil, Libya, Pakistan, Rwanda, Thailand, and Uruguay. Also on the list are teachers in Ethiopia and the West Bank, although those agreements have not been finalized yet.

That 2,500 is merely the vanguard of the expected 5 million that are to be shipped this summer, to places round the globe—provided, of course, that the testing done by these guinea pigs doesn’t uncover any catastrophic issues with the string pully-operated, language-switching keyboard-driven, LInux-based brainchild of visionaries at MIT.

The string pully charges the battery at a rate of 10 minutes of power for each 1 minute of pulling. The whole thing needs just 2 watts of power to go all day. The display switches to black and white for sunlight viewing. The memory is flash-based and USB port-dependent, with nary a space-eating hard drive to be found.

The ultimate goal is 150 million laptops by 2010. That’s a very ambitious goal, but project organizers are cautiously optimistic. We’ll all know more after those teachers report back in.