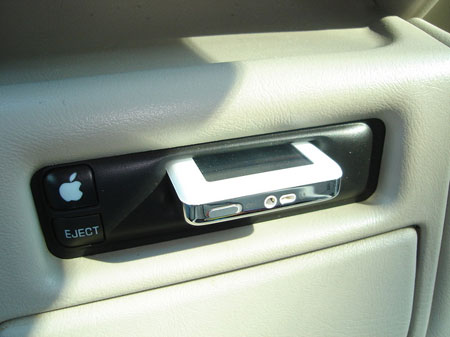 No, that’s not PhotoShop having its way with your imagination. It’s actually an iPod sticking out of a car stereo cassette deck.

It’s the product of a bright mind over at CarDomain.com, who has way too much time on his hands and way too much love for using his iPod in his car. The result of that cocktail of creativity was this mod, which takes a familiar concept and stands it on its head. Much like a Salvador Deli painting, this so-far unnamed invention forces you to look at least twice, to make sure you’re seeing what you think you’re seeing, which is not necessarily what you expect to see.

The inventor also included the Apple logo just for the sheer fun of it, as if someone somewhere in the world didn’t know which company manufactured all those iPods that every third person seems to flaunt.

Now, what we have here is a concept, and it will probably never get past the concept stage. But, like many other innovations, it’s fascinating to contemplate and inspiring to behold.