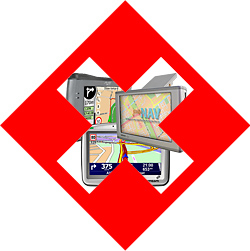 So we recently told you about a GPS device that doubles as a radar detector. Well, don’t take that to Switzerland with you, ’cause they’ll confiscate it from your vehicle and slap you with a big heavy fine.

The Alpine country on January 10 began enforcing a law that bans the use of any navigation device to warn of speedtraps. Police who catch motorists using such devices in such ways empowered to not only take the device away but also to take it out and destroy it.

The Swiss government is far from neutral in its attitude of wanting to keep its roads safe, and it has put forth a list of the offending navigation manufacturers, for retailers to avoid stocking from now on. That list includes some of the industry’s heaviest hitters, including Garmin, Medion, Mio, Navman, Packard Bell, Sony, TomTom, and ViaMichelin.