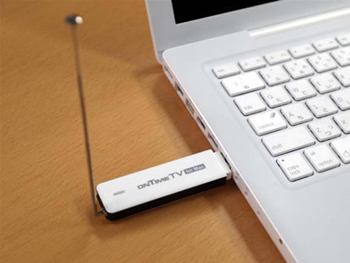 Think of it as DVR for your Mac.

ILuv’s OnTime TV is now available for Apple computers. The Windows version has been out for awhile now.

The device plugs into the USB port of a Mac desktop or laptop. Just scope the attached antenna and you’re good to go for viewing and recording your favorite television programs.

One powerful option is the Electronic Programming Guide, which mimics the functionality of a DVR by letting you record the shows you want when they’re on, so you can watch them whenever you want to. You’re not restricted by the memory on the OnTime TV device, since you’re saving anything you want to record directly on to your computer’s hard drive.

You can get this device after March 1 in Japan for US$122.