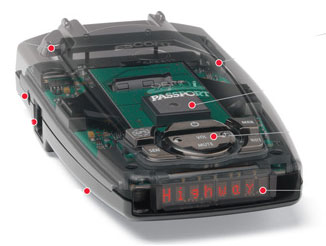 Take it from someone who just got a speeding ticket: A radar detector is one handy device.

I know, I know: I’m not supposed to speed. I’ve paid my fine, which was rather steep, and I certainly won’t consciously do it again for a very long time. Yet sometimes the pressures of the road demand that …

Well, anyway, I would welcome a radar detector that has other features, so I don’t feel like I’m spending money only to avoid getting another speeding ticket. The Passport 9500i, from Escort, is just such a device, packing in GPS and voice messaging systems so it’s one handy thing to have in your vehicle. It even has a USB port, for transferring data from the Web to the Passport.

The GPS is a SiRF starIII chipset. That’s all well and good, but the exciting part is that it is programmable, enabling you to identify and tell the 9500i to ignore false alarms, like an automatic door sensor. The onboard memory system can remember a series of speed trap locations and traveling speed via GPS, and even tell the difference between true and false readings, sounding the alarm if a patrol officer happens to set up shop right next to a known false reading spot.

The LED is a high-intensity matrix display, in bright red, so you can’t possibly miss it even if you don’t hear the sound alarm.

About the only thing not palatable about the Passport 9500i is the price, which is a stiff US$450. Still, that’s a bit less than a handful of speeding tickets.

Mind you, we’re not advocating that you break known traffic laws. We’re merely pointing out a device that might come in handy someday, especially if you have teen drivers, who are expensive to insure anyway.