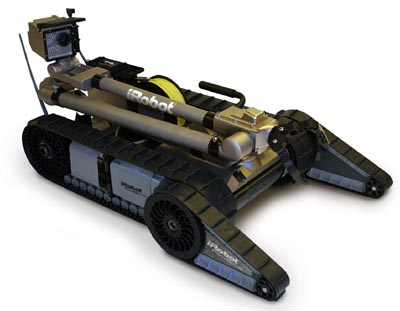 When it comes to handling explosive objects, it’s probably better if you don’t go in there yourself to deal with it. I think it’d be much safer for everyone involved if you just deployed the iRobot PackBot 510 with EOD (explosive ordinance disposal) kit. This speedy little sucker will zoom into action 30 percent faster than previous models, drag larger objects away from danger, and lift things that are twice as heavy as before.

Set to launch in April of this year, the new iRobot — not to be confused with products related to Apple’s music player or the fearsome sci-fi movie starring Will Smith — will likely be used in such touchy situations as those found in Iraq and Afghanistan. The robot is steered using a new “game-style hand controller for faster training and easier operation in the field.” They say that this control scheme is much more intuitive, because so many soldiers have grown up playing video games anyways.