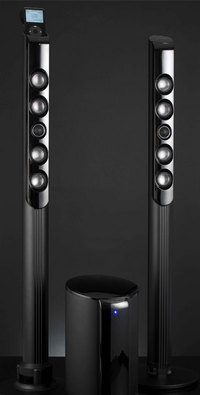 Quick! Where’s the iPod? Look closely. Find it yet?

It’s on top of the left speaker, which is quite a place for it to be, really. Most speaker systems display the iPod prominently in the middle, so it can be seen and heard. This one tucks that DAP away so the focus is entirely on the speakers, which are certainly impressive.

Once you get past the idea that you’re looking at a pair of flutes or a couple of space-age traffic lights, you’ll see the sleekness and attractiveness of the Voix MPX, which is a docking station and stereo system, splitting the sound between the left and right columns, delivering 18 watts of sound each, including a one-inch tweeter. That stout little cylinder in the middle is the subwoofer, which pounds out 36 watts of backup sound.

One thing that might be subtle in the iPod’s placement off to the side is that it’s not important what brand MP3 you have. The Voix MPX takes all comers, as long as you have a 3.5mm socket, which most DAPs and even Nokia phones have.