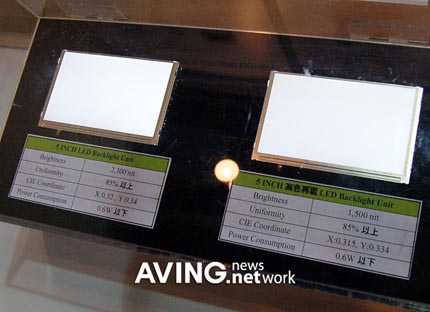 Ever try watching a video when it’s really bright outside? The colors usually become washed out and you have to use your hand to shade out of some of that ambient light before you can tell the difference between Jack Black and King Kong. No longer, because we’re starting to see a greater proliferation of LED backlit displays in laptops, or — in this case today — PMP displays, courtesy of Samsung Electro-Mechanics.

They apparently have two such displays being showcased at ICDL 2007 (International Conference and Exhibition on Display LEDs), both of which are identical in nearly every way with the exception of how much brightness they give off. Both boast 85% uniformity and 0.6W of power consumption, but the backlit display on the left has a brightness rating of 2,300 nit compared to the 1,500 nit offered by the display on the right.