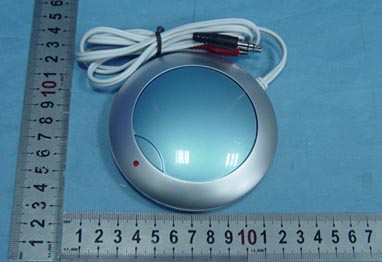 There seems to be a popular trend among electronics to make things as slick and slim as possible. This FM transmission solution totally goes against the grain in that regard because it looks more like a small dome than anything else. Some may even compare it to a stylized smoke detector. Whatever the case, there appears to be two parts to this package: a transmitter and a receiver.

The former gets its juice from three AAA batteries, whereas the latter can either be powered by the provided DC 9V adapter or with four AAA batteries. What you do, as you probably suspect, is connect your favorite multimedia device — iPod, MP3 player, CD player, whatever — to the transmitter and let it broadcast that audio signal over FM. The receiver, then, catches this signal and helps you blast out those tunes. What’s interesting is that the receiver can double as an alarm clock, essentially letting you wake up to whatever music you want. It also plays the role of a standard FM radio.

No word on pricing, but this hub of activity has been approved by the FCC.