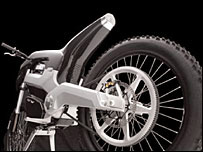 How much of riding a motorcycle is really the sound of the machine itself? That’s the question that potential riders will ask if and when they try out a hydrogen-powered motorcycle, manufactured at Intelligent-Energy, in Leicestershire, the U.K.

Like its automobile brethren, this machine runs on hydrogen, feeding it into a chamber and forcing it react with oxygen. The result is—surprise—water. That water is the only byproduct. No fumes, just vapor.

What we have here is much more than a concept. It’s actually a built bike that has been tested by a large handful of people, including a reporter for the BBC. We have a motorcycle that can rev itself up to 50 mph and get as far as 100 miles before needing to refuel.

What we don’t have yet is a widespread of hydrogen filling stations. Those who can afford the US$11,754 price tag will have to contend with the complete paucity of hydrogen as fuel anywhere except in select laboratories.

This will change, of course, as hydrogen becomes less expensive to make as fuel and, consequently, more readily available. For now, though, we have this hydrogen-powered motorcycle that makes all kinds of nothing as noise. Riders will hear the hum of the road and sounds like birds chirping more than ever before, or perhaps just the roar of other petrol-powered vehicles on the road.