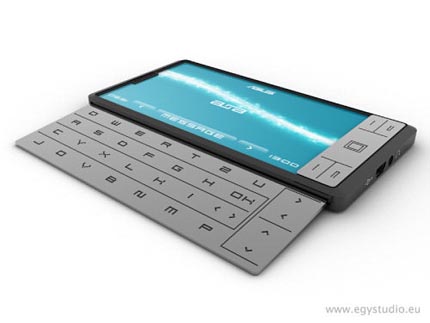 Seems like everyone and their mother has a version of the iPhone these days, and I’m not even talking about the VoIP products from Linksys. Where the ASUS Aura smartphone sets itself apart from the Apple iPhone, however, is that it has a fold-out QWERTY keyboard for easy text input. And yes, that whole thing is a touchscreen. This is the latest in a recent trend among phonemakers to opt for touchscreens over standard keypads, following in the same fashion as the Meizu M8.

Like the Apple iPhone, the Asus Aura too has a two-megapixel camera and it can function in both horizontal and vertical modes, “switching automatically when you flip the phone around.” I guess it’s got one of those accelerometer things in there too, so maybe it has proximity and ambient light sensors too. Other goodies found here include a 3.9-inch display, Bluetooth 2.0, microSD expansion, GSM, 3G (HSDPA), and WiFi. And despite having a QWERTY keyboard, the Aura measures just 9mm thick. Of course, its just a concept now.