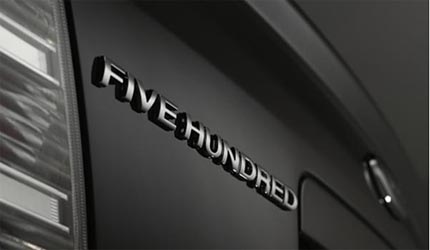 Apparently some guy in Ford’s creative department decided that renaming vehicles so that they start with an F was a very bright idea. It didn’t exactly pan out for the Freestar, and it’s not exactly working out for the Five Hundred. In fact, for the former, it resulted in the eventual death of the Ford minivan altogether. Makes you wonder if it would have survived as the Windstar.

Well, apparently Ford is thinking the same thing because according to the Detroit Free Press, Ford may be inclined to rename the Five Hundred as the Taurus, tapping back into the 20+ years of heritage for the family sedan. Based on the current poll going on at Jalopnik, readers are pretty split on the issue of whether they should rechristen the Five Hundred, with 58.8% in favor of the change, 41.2% saying they should just stay put. Whether they call it a Five Hundred or a Taurus, though, I ain’t buying one personally.