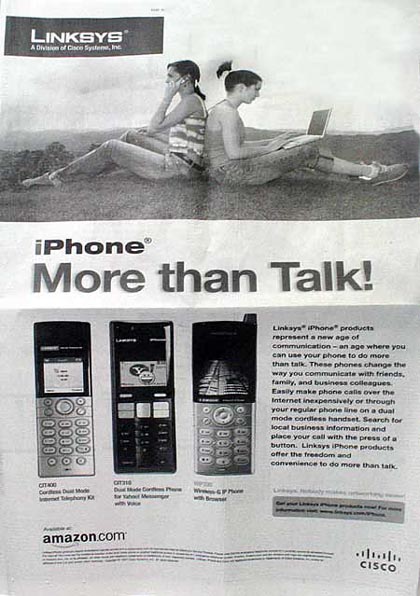 And so the lawsuit drama continues. We all know that Cisco is suing Apple over the use of the name “iPhone”, and they’re not about to back off any time soon. In fact, the Linksys parent company just took out a (very expensive) full page ad in the New York Times, exclaiming that their iPhone is “more than talk!” This is a fairly direct shot at Steve Jobs, who exclaimed that the Apple iPhone “was built around voice.”

In a nutshell, you can’t just trademark a name and then sit on it. In order to continue having ownership of a particular moniker, you have to “actively use it in the marketplace”, and as such, Cisco revealed their iPhone shortly before Apple. The battle continues, but this latest move by Cisco is akin to chimpanzees throwing their feces or a petty schoolyard scuffle. “Na-na-na-na-na-na,” says Cisco (with its tongue sticking out).