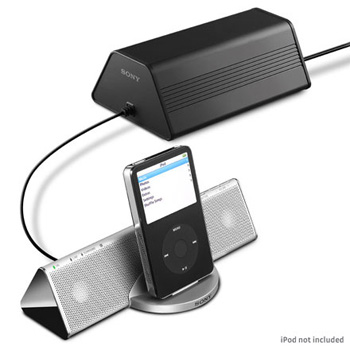 Yes, that’s the word SONY on the bottom of this new audio docking station for the iPod. No, Apple and Sony haven’t signed a peace treaty. Sony still wants to sell its own DAPs and have its own way to get music to them, but the bean counters at Sony recognize that an 85-percent market share is tough to ignore.

So, we have the CPF-IP001, an elegant, two-piece dock and stereo set for perhaps the most famous non-satellite gadget in the world. The two main speakers give you a respectable 5 watts of sound, and the subwoofer, despite hanging out by itself a cord’s throw away from the dock, gives you 15 watts of backing vocals.

As with other docks these days, it comes with a remote control. You can also hook up the speakers to another kind of music player (not that there’s anything wrong with that).

The CPF-IP001 isn’t cheap, though. Before you plunk down US$250, you might want to know that it supports all flavors and versions of nano, the latest iPod video, and (Remember this one?) the mini. Don’t go trying to hook up your new colorful shuffle because it just won’t work.