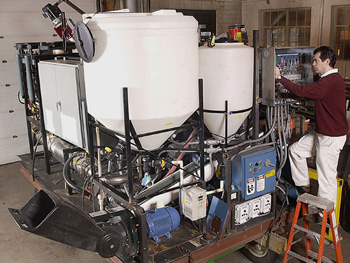 Not long ago, we told you about ethanol being made from trash. Now we have something much more exotic: the tactical biorefinery.

As you can probably surmise, the product (and quite possibly the name) were created at the behest of the U.S. Army. Scientists at Purdue University are the culprits—sorry, the inventors of the van-sized generator, which takes all manner of trash and turns it into energy. You can stuff paper, plastic, cardboard, food waste, woodchips, and even Styrofoam in one end and expect to get electricity out the other end.

Ethanol is one of the products, if you have fed food waste into the machine. The primary product of the diesel engine, though, is electricity, courtesy of a gasifier that creates propane and methanol to power the diesel engine that ends the process.

The machine can run on diesel oil for a few hours while it’s processing all of its trash and turning it into fuel. Then, it’s a fuel source extraordinaire.

The Army likes it because they can feed all of their trash into it and remove all trace of their presence once they’ve left a place. The tactical biorefinery is mobile, after all, which was entirely the point. And, it’s somewhat environmentally friendly, because it burns only diesel fuel for awhile and then biowaste.

The prototype scored impressively on the efficiency scale, producing 90 percent more energy than it took in.