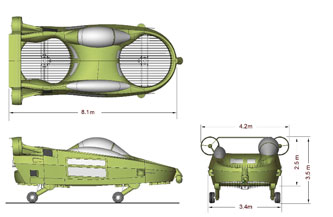 Still think that flying cars are something that is only possible in an episode of the Jetsons? Not so, if Rafi Yoeli of Israel is to be believed. In fact, he claims that his X-Hawk flying vehicle will be ready by 2010! Got stuck in the Interstate amongst the morning traffic jam? Just hover on over it! Congestion no more!

Urban Aeronautics, Yoeli’s own company, says that the X-Hawk will initially be implemented “as a workhorse vehicle that could be used by firefighters, rescue teams, and the military to aid in the recovery of people stranded in hard to reach places.” You see, the X-Hawk flying car has the same level of maneuverability as a helicopter, except the “ducted fan design” has no exposed blades. Taking off and landing is done vertically, whereas horizontal movement can approach speeds as high as 155mph. The exact range of these vehicles has not yet been determined, but they say that it can remain in the air for about two hours.

An unmanned “Mule version” is expected to hit the air in 2009, whereas larger renditions — including one designed to house 10 passengers — are being planned for the near future. Flying won’t come cheap, of course, with the estimated price sitting between $1.5 and $3.5 million, “and Yoeli admits those estimates might be low.” (I guess I’ll have to wait for the Yaris or Fit edition)