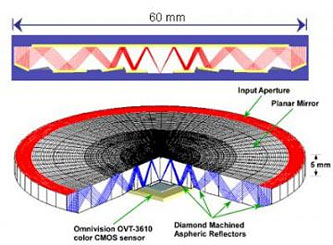 Telephoto lenses are getting thinner and thinner, almost at the same rate as mobile phones. In fact, one is feeding the other.

A group of scientists at the University of California-San Diego has developed a lens that is just 5mm thick but is equal to a focal length of 38mm.

To do it, the scientists folded a traditional optical system over on itself, just like telescopes did way back in the 17th Century. Light passing through the 5mm lens bends and focuses light inside a single optical crystal, rather than a series of lenses, as with most other systems.

That’s a super-thin lens with a super-powerful payoff, one that can enable vision in cameras of variable shapes and sizes, including digital shooters and even surveillance aircraft. We’ll probably see it most, though, in the mobile realm.