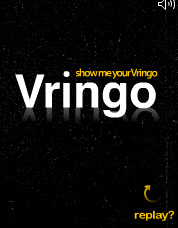 We have video iPods. We have mobile phones that play videos? Why not video ringtones?

Well, we have them now, thanks to a Israeli company called Vringo. Representatives of the rather trendily named startup unveiled the technology at the Demo tech conference in Palm Desert.

Here’s how it works: You call your friend or a family member. If you both have video-enabled phones, then whoever you are calling can see a video that you chose to send. It’s the reverse of an audio ringtone, which the receiver chooses. Some phones allow users to choose an audio tune that the calling party hears, but Vringo puts the creativity entirely in the hands of the caller.

The service is free for now, but you can bet that that won’t last. You’ll have to pay a bit to use this service, as well as for each video clip that you download, although that download will grant you unlimited use.

Also for now, video ringtones are entirely in the hands of people who know one another. In other words, you can send a Vringo only to someone on your Contacts list. That certainly lets out telemarketers—for now.