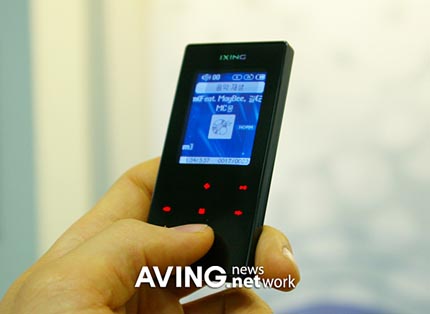 Here is the answer to a question that no one asked. What do you get what you cross the slim form factor of an iPod nano, with the black-and-red theme of the LG Chocolate? Apparently, the outcome is the IXINg TM-S4 digital music player being presented by Technonia. Measuring just 7.8mm thick, this is one of the skinniest MP3 players on the market, but the IXING TM-S4 comes with those slick touch sensitive keys that are all the rage.

The 1.8-inch full color OLED display isn’t just good for image and text viewing on the go, but apparently it’ll also handle WMV movies with the best of them. There isn’t all that much memory on board, so don’t expect to carry several Hollywood blockbusters with you on the road though. In addition to the usual platter of music formats — MP3, WMA, and OGG — this player is also equipped with an FM tuner, voice recorder, direct recorder and multitasking capability.