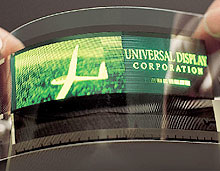 Advancements in LED technology could lead to significant breakthroughs in military and law enforcement efforts.

A group of scientists at the University of Southern California have put together an organic phosphorescent LED display that can be seen at night, but only if you’re wearing the proper equipment. At the base of the display is a dye molecule that gives off near-infrared light, which is invisible to the naked eye but perfectly visible to someone wearing night-vision goggles.

Such construction could lead to an increase in communication and effectiveness of military and law enforcement operations, as they are able to distinguish details at a very high rate thanks to the OLEDs. Moreover, the organic polymers easily lend themselves to bendable plastic, bringing up the possibility of such technology being installed into a helmet visor. That’s good news for armed forces personnel on covert operations and police doing any sort of surveillance.