Competing directly against the e-ink goodness of the iRex Iliad and the Sony Reader is the STAReBOOK. The reviewer says that it is “a very nicely made device”, but it’s not without its issues.

On the plus side, Staretek didn’t cheap out on materials for the STAReBOOK, giving an “iPod-like soft-glossy finish.” He also enjoyed the rubber grip on the backside as well as the overall look which was “very sleek [and] stylish in an understating kind of way.” Navigation is straight-forward with the 4-way cursor pad: up/down changes the font size, left/right flips the pages (the latter of which is “VERY fast”). Bootup times were quite speedy as well, significantly faster than the Iliad. Oh, and this plays music too.

On the downside, the screen, at just 6-inches, is a touch on the small size, being dwarfed by the 8-inch screen found on the Iliad. What’s more the ergonomics are only “OK” as the page-forward key “is slightly too close to the edge of the device.” The biggest limiting factor — and it’s a doozy — is that it only supports .stk files at this time. Maybe with future firmware upgrades, they’ll rectify that.

Overall, the reviewer was impressed saying that his “initial impression of this device is WOW!!!” Retail price should be in $400 range. 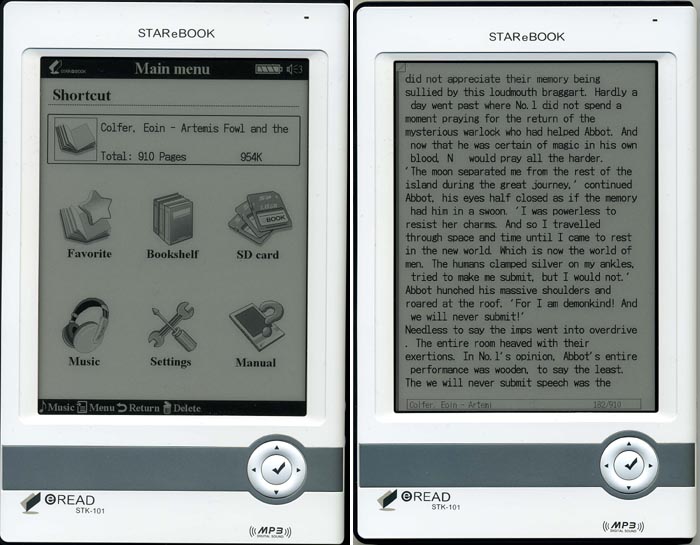