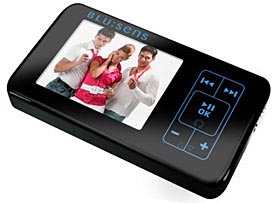 The Microsoft Zune isn’t the only digital audio player on the block to pack in WiFi. The G14 from Blu-Sens has got it too, and what’s more, it’s even got Bluetooth. Granted, it probably won’t get the same level of market penetration as the wonder from Redmond, but this Spanish-developed DAP has got plenty going for it.

For starters, the WiFi and Bluetooth-powered transfers are actually completely unrestricted, unlike the play-it-three-times thing that the Zune has. Unfortunately, the Blu-Sens G14 loses on the internal memory front as it will only be available in 1GB and 2GB varieties. The color screen is a little on the small side too at just 2-inches. Good thing it supports DivX (in addition to MP3, WMA, and OGG).

No confirmation on price, but early estimates have it in the $230 to $260 range.