To kick off their “Playing Loud and Going Fast” campaign, Ford Motor Company and Fender Music Instruments Corporation have created a very special combination consisting of a hot Shelby GT coupe and a special Stratocaster guitar to match. Fender is already very well known for their incredible guitars, but now they’re really starting to make a name for themselves among the gearheads. Earlier this month, we heard about the Fender-Panasonic deal (VW is already on-board), and now Fender has this special arrangement with Ford.

And if you’re the type of person that loves having things that no one else does, then this “spirit of rock-n-roll on wheels” is right up your alley, because they have only made two car/guitar pairs. The first was auctioned off for $600,000 at the 2007 Barret-Jackson Collector Car Event with full proceeds going to the Carroll Shelby Children’s Foundation. The other is up for grabs through this sweepstakes.

The total sweepstakes prize is valued at over $50,000, with $20k of that coming by way of the Fender Stratocaster guitar. Oh, and in case you didn’t know, Fender is responsible for instruments used by ZZ Top, John Mayer, the Rolling Stones, and many many other notable artists. 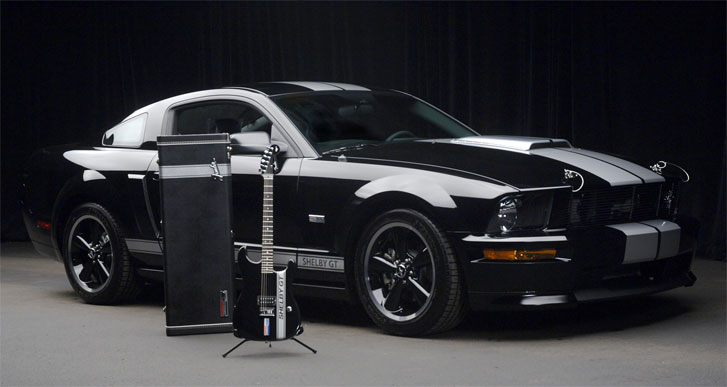