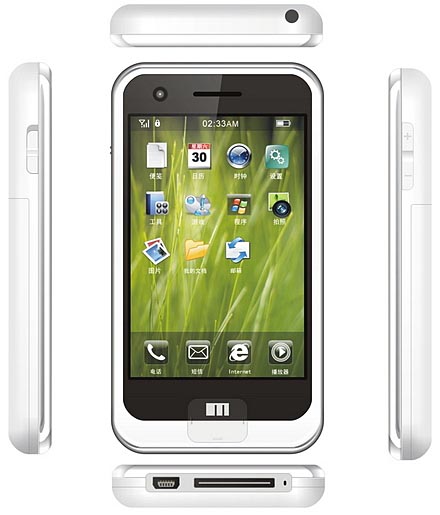 Is that the Apple iPhone for Asian markets that I see? Oh no, wait, it’s yet another (not so cheaply made?) clone courtesy of Meizu. The Meizu M8 looks just like the iPhone in every way, including the fairly unique set of icons for navigation. In fact, the M8 is more Apple than Apple as they’ve opted for a glossy white finish instead of a black one. There hasn’t been any company confirmation at this point, but it’s not unlike Meizu to “borrow iPod styling cues“, you could say.

In terms of raw specs, the M8 is said to sport standard GSM, TD-SCDMA for 3G data, a 3.3-inch widescreen (720×480) display, Bluetooth, and an ARM11 CPU. What’s more, they’ve upped the ante in the camera department, beating Apple’s picture-taker by one whole megapixel. The 3MP cam on board is also capable of recording video at 30fps (at the device’s full 720 x 480 resolution).

Still “just a rumor” at this point, but a incredibly juicy one that seems fairly well grounded in reality.