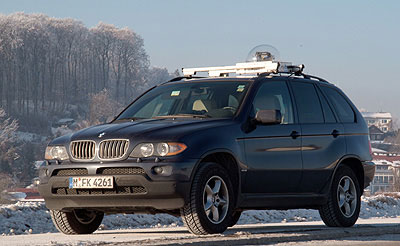 A prototype for a new in-car satellite radio system has been unveiled in Europe, developed by the European Space Agency and piggybacking on existing technology to deliver enhanced audio performance. The system had its first public viewing at Holland’s Noordwjk Space Expo.

The European system will use decommissioned TV satellites that once did broadcast for major networks. Those satellites, as do all Earth orbiters, eventually run out of fuel and drift from their position; as such, they have outlived their usefulness for TV programmers, who rely on fixed-position satellites to ensure accurate and quality digital programming. The ESA, however, can compensate for that drift by tracking it and using it to broadcast digital radio signals.

A mobile antenna on vehicles will keep up with the radio signals, even in tunnels and in bad weather. This can happen because the European system does the U.S. system one better by eliminating a ground repeater station in favor of caching at the car’s antenna. This kind of signal could also be used to transmit travel and weather information and even digital maps.

It might even be the future of GPS, if it ever gets off the ground. Initial interest seems to be strong, but momentum, and funding, need to be strong as well.