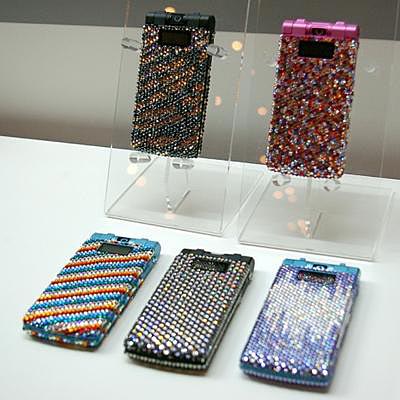 The ultimate in bling goes by just one name: Swarovski. The world famous crystalmaker has teamed up with Samsung to create the jewel-encrusted 707SC flip phone. They didn’t say for sure, but I wouldn’t be surprised if the “SC” part of its name stands for “Swarovski Crystal”, or maybe “Super (eye) Catching.”

It’s the uber shininess that will most certainly attract the most attention, but for all the techies in the audience, the shimmery Samsung 707SC does not fail to impress either. It’s got high-speed HSDPA, Picsel document viewer, and an on-board dictionary to translate between English, Japanese, and Korean. It’s slim and it’s shiny, so it’s got to sell, right? Too bad for North Americans and Europeans, because chances are this is an Asia-only release with a launch scheduled for March.