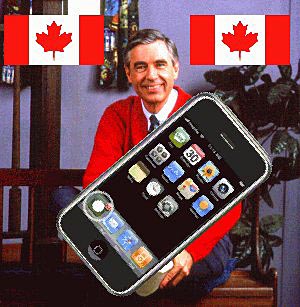 Won’t you be my neighbour? (I miss you Mr. Rogers)

Everyone already knows that the Apple iPhone will be exclusively available through Cingular Wireless (soon to be the new AT&T) in the United States, but what about Canada? We basically only have one major GSM service provider, but luckily, they’re getting the iPhone too. And this isn’t just some random rumbling on the internet either, because apparently an email was received from a Rogers Wireless customer service rep, stating specifically that they will be the “exclusive provider of the iPhone in Canada.”

Nothing has been set in stone yet, of course, as “Rogers is actively working with Apple to launch the iPhone in Canada as soon as possible.” Pricing might be a little scary, as cell phones in Canada usually cost more (and come later), and data rates may make the iPhone too expensive to be mainstream in the great white North. After all, it costs $100 (in addition to your voice plan) to get just 200MB a month with Rogers. All said, with voicemail and so on, you can expect to pay well north of $150 every 30 days.