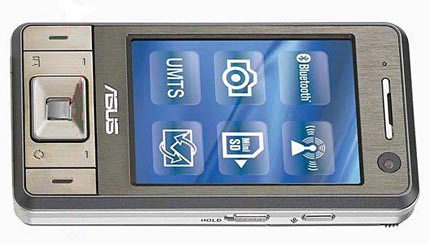 Ah, Asus. The company that I rely on for motherboards, the company that loves emblazoning their laptops with hot Italian sports car insignias. As you may already know, they make plenty of smartphones and PDA phones as well, today announcing the latest addition to their lineup, the P735 GPS phone. It may not have a QWERTY keyboard, but it does support high-speed UMTS. Like the P535 before it, the P735 is also designed to navigate you around less than familiar territory via its GPS functionality.

The rest of the specs are still a little murky at this point, but it’s probably safe to say that it will also boast GSM/GPRS radios, Bluetooth (although probably without stereo A2DP), and a miniSD expansion slot so that you can load up all those 3D maps. Based on the screenshot provided, we’ve got to assume that the P735 also has dual cameras: the front video telephony unit can be seen quite clearly, but the rear main camera has not been revealed.

Update: I just got an email from Randy Chang of ASUSTek and he’s telling me that the P735 does not have GPS. Go figure.