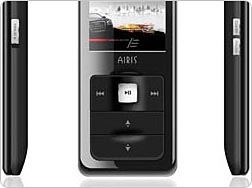 Airis clearly isn’t one of the bigger dogs in the MP3 player yard, but that’s not going to stop them from competing against the biggest (and skinniest) dog out there: the iPod nano. The French electronics maker has just unveiled their new N0031 and N0042, both of which measure just 0.53-inches in thickness. That said, they’ve got a couple of extra features that the Apple equivalent is lacking.

For starters, the 1.5-inch LCD can be used to play SMV videos. And like most other players on the market (with the notable exception of Apple), the Airis units pack in an FM radio tuner (with recording). Weighing in at 1.4 ounces, the same as a nano, the Airis N004x series can handle JPEG/BMP photos in addition to the usual suspects in music (MP3/WMA). The claimed battery life has you listening to ten hours of tunes on a single charge.