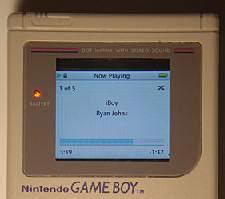 It may not be quite as functional as the turning a Nintendo DS into an iPod mod that we saw earlier this month, but it’s certainly got a heck of a lot more going for it in terms of being retro chic. Some crazy kook who goes by “sirljohns” has effectively transformed his old school Nintendo Game Boy (yes, the brick with the spinach green screen) into a fully functional Apple iPod. And you thought the “OG handheld itself” had completely lost its value after you picked up the Game Boy Advance, Game Boy Advance SP, and the Nintendo DS Lite. Ha! Old school is where it’s at, boiiiiiiiiiii! (sorry, that was incredibly lame and will never happen again)

Affectionately christened the “iBoy”, this iPod-Game Boy amalgamation obviously doesn’t have the awesome click wheel that everyone loves, but imagine the oohs and ahhs you’ll receive from all your tech-loving friends when you whip out that beige block and have it pump out the latest ditty from Diddy.

No video tutorial, but he’s got a bunch of pics.