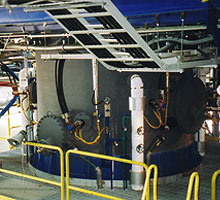 Turning trash into ethanol is all well and good, but what about the waste involved? Current technologies involve burning that trash, which releases toxins and other unfriendly things into the air. Even if the result is ethanol, it doesn’t exactly help tame things in the air pollution department.

A new idea, however, has risen to the top of the trash production heap. Scientists at MIT and Batelle Pacific Northwest National Labs have turned the trash-into-ethanol procedure on its head by removing the burning part of the process. Instead, a specially designed machine vaporizes the trash. The result is hydrogen and carbon monoxide, which are then synthesized into ethanol and methanol. The two-step process also results in a charcoal-like residual, which is gasified and oxidized, resulting in a molten glass material that hardens into something that can be used in road construction.

The procedure is now being put into practice at Integrated Environmental Technologies, a company in the same city as Batelle Pacific. IET hopes to perfect its process and gain big business as customers. Seems logical if they can pull it off. After all, the supply of trash is nearly inexhaustible. In no time at all we can be pouring leftover beers (if there is such a thing) and banana peels into our Delorean’s. Next up, hoverboards?