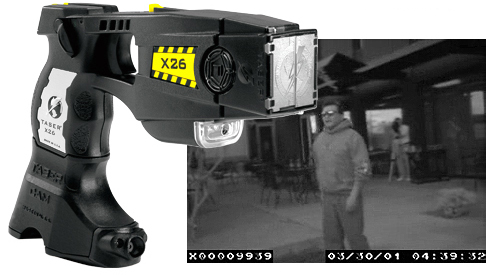 Well, now we can have video evidence that all those belligerents who were Tasered into submission actually deserved it.

Taser International, makers of the stun guns popular with law enforcement officials, has brought out the Taser Cam, an attachment for the stun gun that shoots video of whatever the gun’s “shooter” sees before and during the “shot.” The camera, which fits in the gun’s handle like a cordless drill battery pack, has a microphone as well and even an infrared illuminator, so those night-time shots aren’t lost in the dark. The footage is easily transferred to a PC via a USB cable.

That’s all well and good, but we fear that we’ll be seeing these kinds of videos on Cops sooner rather than later. Regardless, the ability to record the circumstances surrounding the use of a stun gun will no doubt be a big help to both the users and the recipients. Check out the funny video below about a TaserCam victim.