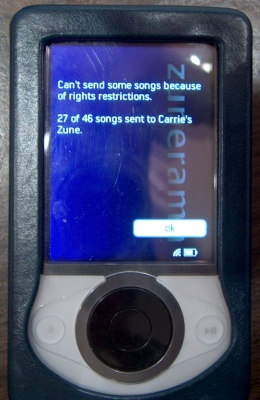 Prognosticators are people who tell you what’s going to happen before it does. Sometimes they’re right, and sometimes they’re wrong. The best ones are right more often than they’re wrong. The best ones also have particular skill or perhaps some way of seeing the future. Even the worst prognosticator, however, should have seen this one coming: The music arms of Sony and Universal have done a big fat smackdown on Zune, prohibiting it from sharing songs owned by those two companies.

Remember the Microsoft marketing folks shouting from the rooftops that the ability to share music would make their product an iPod killer? We do, too. Guess no one from Redmond bothered to call Sony or Universal.

Actually, they did, and that’s how we got the “three days or three plays” policy, which the S and the big U look to be reneging on. The Zune is just beginning to find its market share (badly trailing even iRiver and Sanwa in the Catch Apple sweepstakes), and now its most innovative feature gets shot down in flames.

The worst thing, from a user point of view, is that unless you’re hip on just which of your favorite artists get their marching orders from Sony or Universal, you won’t find out until you go to share those tunes. (In case you’re wondering, that’s a huge group of artists, so the chances of your encountering this sort of prohibition are rather large as well.)

There is one way to avoid all of this hassle, of course: Don’t buy a Zune.