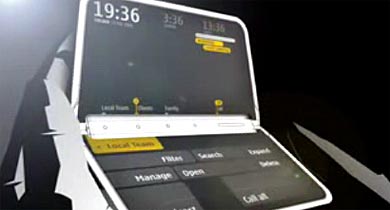 Didn’t you know? Apple isn’t the only touchscreen cell phone in town. Big dog Nokia is apparently working on a dual touchscreen concept phone that they have christened the “Achieve.” It’s not quite ready for market, but it’s nice to see ideas like this coming out of some sort of official source rather than a random designer on that Yanko site. Like the N93i video that we saw yesterday, Nokia is emphasizing the capability to “share” with the Achieve.

Naturally, it’s got all the latest features like Bluetooth audio, smart wireless conferencing, remote presentations, and so on. This is Nokia’s “View of the Future” and they make sure that you know that the concept phones described in the video “are not showing prototypes of actual phones”, but are rather “exploring futuristic concepts and potential new ideas.”