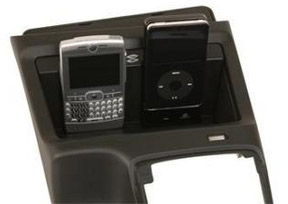 This isn’t exactly space-age technology, but it is definitely something that fills a current need. Herman Miller, known for designing sleek yet functional office furniture, will come at us soon with desks, tables, and perhaps even chairs equipped with eCoupled, a charging system for portable electronics devices like mobile phones, PDAs, and MP3 players.

The device still needs a cord to plug into the wall, but it does its charging via a magnetic field. Just plunk that phone, Blackberry, iPod, or other device that you can’t leave home without into the charging area on your desk and let physics go to town. You probably would want to keep your pens and paper clips on the other side of your desk, but this eCoupled thing sounds like a really good idea. When we’ll see it is anybody’s guess. Pricing should be on the high side but somewhat reasonable, as with most Herman Miller products.

The technology behind the deskbound charger is also being marketed to automotive companies. Visteon, which makes auto parts, will this summer release a charger that plugs into your car’s cigarette lighter and then juices up anything it comes in contact with. That charger will cost less than US$100, Visteon says.

As for the Herman Miller desks, we typically have nothing more than an announcement.