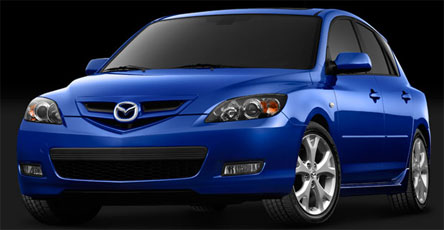 A rash of Mazda 3 owners have fell victim to a sneaky method of forced entry to their zoom zooms. When returning to their vehicles the passenger side door has a dent, and all of the items once in their cars, are now gone. No glass smashed, no door locks jimmied, just a side blow to the door will grant entry to the thief.

According to a Mazda dealership that wishes to remain anonymous, it works by someone creating a large blow in just the right place on the door panel. It will leave a dent in the door of course, but this dent goes past the door frame, to the lock assembly mechanism and activates the linkage also tricking the computer into thinking that it was legitimately unlocked by your key or remote.

This problem is with all Mazda 3 cars, and it may even be to other models, we just don’t know the extent of this issue yet. Mazda has known about this problem for over 4 months now according to local Victoria Police, all that is being done at the moment is if you have been subject to a break-in, you can get a reinforced door lock assembly and a protective plate that will stop this from happening again. One victim on A Channel News Victoria claims that Mazda will repair his locking assembly, but not the dent in his door caused by the break in itself.

Mazda Canada at the moment has no policy on repairing this problem for anyone that has not been subject to a break-in.

One dealer has said they would upgrade the lock assembly and reinforced protector plate at no charge.

Update 10:45AM: Greg Young, Director of Corporate Public Relations for Mazda spoke with me this morning. He acknowledges that Mazda has been aware of this issue since October 2006, they have been working on the situation with some degree of considerable effort and expertise. Mazda is studying it, and they have made a countermeasure in components from Cars that have been built in January 2007 in Japan. This countermeasure is to prevent this specific type of break-in. There is no defect in the product; the countermeasure produced will make it more difficult or not possible to break-in to the vehicle in this specific way. However, as any vehicle is susceptible to a break-in, normal precautions should be taken.

Mazda has not determined whether they will upgrade vehicles that have not been broken into.

If you are concerned with your vehicle, a supplemental aftermarket alarm system may be a solution, and obviously do not leave any valuables in clear view and plain site.