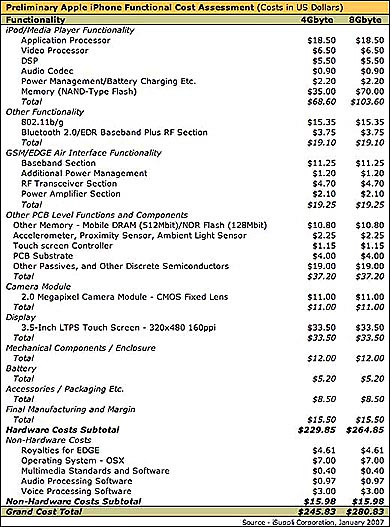 I argued that the iPhone might be too expensive to get the same level of mainstream penetration as the iPod, but apparently it doesn’t cost all that much to actually build the “revolutionary” device that is said to combine all the functionality of a widescreen Video iPod, a top-notch cell phone, and a mobile internet device. In fact, according to current estimates, the 4GB iPhone only costs $245.83 to manufacture, which is about half of the $499 asking price (after the rebate associated with signing a new two-year contract with Cingular… er, AT&T).

The only difference between the 4GB and 8GB iPhone is the on-board Flash memory, and as such, the bigger brother costs $35 more than its 4GB compatriot, effectively weighing in at $280.83, well below the $599 (plus tax) that Apple will want from you when they sell the 8GB iPhone to you in June. In checking out the breakdown to the right, the touchscreen costs only $33.50 while the touchscreen controller is just $1.15.

Of course, these figures don’t include R&D, advertising, and Steve Jobs’ expense account.