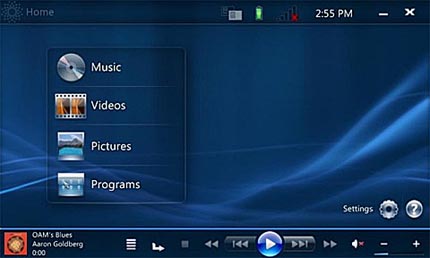 UMPCs haven’t been on the market for all that long, but they’re all just about to get a fairly substantial in the form of an all-new operating system. Maybe you’ve heard of it. It’s called Windows Vista. It is with this new interface that Microsoft hopes to breathe new life into the UMPC market, which has otherwise not performed as well as early developers had hoped.

Remember when the it was called the Origami project and how everyone thought it would revolutionize mobile computing forever? Well, that didn’t exactly pan out, but they’re not abandoning the project name. In fact, the new software upgrade is called “the Origami Experience.” With this Windows Vista-like facelift for the UMPC, the focus shifts away from productivity (in some ways) and more towards multimedia. You get treated to a new Home screen (like in the big picture to the right and not like the little picture to the left), which some may say is almost Mac-like in feel. The upgrade looks pretty sleek, but is it enough to save UMPCs? We’ll just have to wait and see.