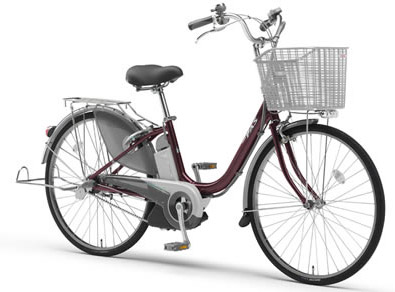 Where I come from, the bicycle is a machine that you ride in order to get exercise, to push yourself to get fit and work your legs and your cardiovascular system. But maybe that’s old school.

Yamaha certainly thinks so. It’s releasing a bicycle for all of us, one that packs a smallish yet powerful enough electric motor that can help us up the hills and through the wind and past mere mortals who are relying on only their own two legs.

That electric motor gets its juice from a rechargeable lithium battery. That’s all well and good from an environmentally friendly standpoint, but the fascinating thing here is that the motor is tied in to a series of sensors that feed into a computer that continually monitors pedal force and speed and then calculates the amount of extra power to provide to the bicycle’s rear wheel. It’s about as close to a constant speed as you can get without paying way too much attention to a heart rate monitor.

Word on the street is that you can achieve speeds of up to 104km on these bikes, which might be entirely too fast for most people, so beware of the potential.

The PAS series, which includes six different bikes, will have its official launch next month in Japan. Prices will start at US$800 to US$990.